This story is a piece of a larger narrative about a time I trekked for 24 days through the Annapurna Circuit deep within Nepal’s Himalayan wilderness. But for now, this story is a standalone tale of the unforgettable kindness bestowed upon me by the Nepali people.

For most people who set out to tackle the Annapurna Circuit these days, the trail ends in a town called Jomsom, two days walk down from the highest point of the trek, the wind blown, barren landscape known as Thorong-La Pass at 5416m (17769ft).

Most of the blogs that I read beforehand said that you couldn’t walk on past Jomsom because the path had been replaced by a Jeep road. Once I got to Kathmandu I found out that there was path from Jomsom, it was on the other side of the river from the Jeep road.

I had a map, and I had the not-so-trusty, never there when you need them red and white painted trail markers to guide my way. I left from Jomsom at 7am, bright and early to beat the afternoon winds that come sweeping up the riverbed. From looking at my map, I planned to walk along the riverbed until I came to a small village, cross one of two bridges which would take me over to the larger town, Tukuche, where I could get some lunch, cross back over to my private side, and continue on to my ultimate destination of the day, Kalbeni. And so we find our heroine leaving from Jomsom on a bright, sunny, absolutely perfect Himalayan morning. The path took me through riverside villages, farm fields of wheat, apple orchards, and an enchanting pine forest accompanied by the distant sound of a rushing Himalayan river. I visited a village with a Tibetan refugee center, and climbed up a narrow staircase cut into a rock wall to visit a farming village sitting atop a promontory overlooking the river with snow capped Himalayan peaks rising in the distance. If heaven is a real place, this walk is part of it.

Pine forest and the trail marker.

But eventually it came to be noon, and then one o’clock. And though these villages were picturesque, they lacked the ubiquitous teahouses that characterized every village on the other side of the Annapurna Circuit. What this meant for me was nowhere that served lunch. With no food in my pack, I had to get to Tukuche.

And then I saw a posted map. It showed the village I had just passed through, and it showed the river with two bridges crossing it. But the bridges were crossed off.

No, I thought to myself, this can’t be. Surely someone in Jomsom would have mentioned that these bridges were gone!

But I hadn’t told anyone in Jomsom my plans. All my trekking friends were either ahead of me, or had gotten a Jeep out of Annapurna. I was alone. I had no food in my backpack, and the bridge that I needed to get the only town where there would be food was washed away.

Still, I held onto the hope that the sign was wrong and the bridges had been rebuilt. Until I rounded a corner five minutes later and the riverbed opened up in front of me. There were the supports for two bridges, but there was a distinct lack of bridge on top of them.

So just so we are clear. I had eaten a bowl of oatmeal that morning at 6:30am and had now been walking for about 5 or 6 hours. I’m starving. And there is a rushing Himalayan river of questionable depth between me and the only meal within a 10 mile radius.

What else could I do? I had to cross the river.

I took off my shoes, rolled up my pants, and stepped into the ice cold flow.

After only a few steps I could feel the current pulling at my legs. My feet were slipping all over the stones in the river bed. By the time I was up to my knees I was losing my balance and afraid that the heavy pack on my back would cause me to fall in and drown. I gave up and headed back to shore.

‘This is ridiculous,’ I told myself, ‘quit being a baby. You’re tough as nails and you are going to walk your ass across this river because it just can’t be that deep!’

I took of my shoes and my pants all the way off and stepped into the flow. I made it all the way out until I was up to my hips, not even a quarter of the way across the river, before I gave up and struggled back to the shore.

There was nothing for it, I realized. I was half crazed from hunger and going to have to walk all day without lunch. Hopefully find a house on this side of the river where I could get some food and a bed, but I wasn’t optimistic. Things were not looking good.

I had just finished putting my pants and shoes back on when I heard a shout. I looked up to see a small Nepali man walking out of the woods onto the riverbed, motioning for me to come meet him by the river.

I was a little nervous about approaching a strange man in the isolated Himalayan wilderness, but what other choice did I have, really? I desperately needed to cross this river and its not like I could pretend he was shouting and waving to someone else.

“Tukuche?” He asked me abruptly, motioning towards the distance village across the river.

“Alone? Friends?” He asked, looking around.

“Alone.” I replied. He threw his hands in the air and rolled his eyes at me. What was a young woman like me doing out here, alone, on this side of the river.

Then he motioned for me to take off my bag. I tried to protest but he grabbed it, held it aloft over his head, and marched right into the river and crossed over to the other side like it was nothing. Depositing my bag on the distant rocks, he turned around, crossed again and held out his hand for me.

“Don’t look down. Look up! Look up!” he said, pointing to a distance mountain peak. And so I did. I looked up, and with a vice-like grip on my arm this tiny Nepali man half pulled, half carried me across a raging Himalayan river.

Successfully reunited with my bag and safely standing on the correct side of the river, I turned to say thank you and goodbye to my savior.

“You like Dal Bhat?” He asked. Dal Bhat is the national dish of Nepal and pretty closely resembles a typical Indian meal.

I confirmed my love of Dal Bhat and he invited me to his house for lunch.

He strode, I struggled across the rocky dry riverbed, through apple orchards, and into Tukuche. Up until this point I had walked through villages, but only stayed in the teahouses, which are set up like basic hotels. Now, for the first time, I got to see the inside of a traditional Nepali house.

There was a large wooden gate in a stucco wall that faced the street. Behind the gate was a courtyard onto which all the doors of the house opened. When we entered, his wife and two daughters came out of one of the doors, saying something in Nepali before stopped dead in their tracks when they caught sight of me.

The man who rescued me, took me in, and fed me.

My host, whose name, and please forgive my spelling, sounded like Uhmlahl, quickly detailed the story to his family, who immediately started laughing. His wife motioned for me to pass through a door in the back.

Taking off my wet shoes and socks, I entered their family room/dining room/kitchen. The walls, floor, and ceiling were all made of thick beautiful dark wood. We sat at benches around a long wooden table and his wife went behind a divider to cook.

Uhmlahl and I were soon served milky Tibetan tea and the most delicious Dal Bhat meal I have ever eaten. Lentils, rice, vegetables, I even got a fried egg. I did my best to eat it slowly and respectfully, but luckily in Asian cultures wolfing down your food shows your host that you appreciate their cooking.

Then two of Uhmlahl’s four daughters came out to sit with me. The youngest, Asha, was working on her English homework for school. She was too shy to actually talk to me, but she understood what I said and did look up and giggle a few times. The elder, 16, could speak English rather well and was happy to tell me about herself and her family. Turns out they had had two American college students come and stay a few years ago to learn about Nepali culture.

After lunch and conversation, I eventually had to say my goodbyes and continue on down the road. What could have been the worst, most disastrous day of my entire Annapurna trek turned into one of the most beautiful experiences I had during my six months backpacking around Asia. I will never forget the kindness bestowed upon me by Uhmlahl that day, and I will try to pay it forward if I ever meet a Nepali man stuck on the wrong side of the river in America. A river stretches away into the Annapurna Wilderness

Pay it forward, guys. Beauty is everywhere. Adventure is calling. 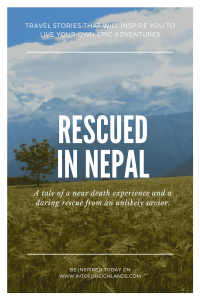