What would it be like to visit Machu Picchu without the crowds? How incredible would it be to wander around the temple at your own pace, soaking in the silence and leaving no stone uninvestigated? While you’ll probably never get a private visit to that storied temple, there is another temple in Peru, similar is size and design, yet visited by less than 20 people a day. What is this elusive mystery? The secretive and secluded Choquequirao Temple.

For those intrepid travelers with a taste for adventure, Choquequirao offers a rare opportunity to take in Incan architecture and splendor without the crowds. A guided tour can cost hundreds of dollars, but if you are willing to take the plunge, hiking to Choquequirao without a guide can cost less than $200 and offer up the adventure of a lifetime. 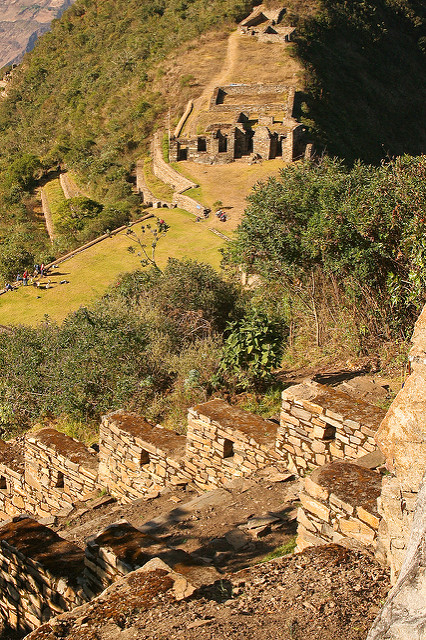 Pronounced “CHOCK-ey-keer-ow” this little known Incan temple is similar in style and structure to Machu Picchu. It was constructed in the 15th or 16th century, making it slightly younger than Machu Picchu. Choquequirao was also one of the last strongholds of the Incan warrior Manco Inca Yupanqui during his final resistance against the Spanish.

The site has been “rediscovered” multiple times throughout the centuries, most notably by Hiram Bingham in 1909. Excavations on Choquequirao only began in 1970 and are still ongoing today.

The temple sits at 3000m (9,800ft) above the Apurimac River, on the very top of a mountain ridge. The only way to get to Choquequirao is by trekking for four days across hot, dry, and steep terrain.

There is also an extension of this trek which can take you all the way to Machu Picchu, through some of Peru’s most legendary scenery, over the course of 9 days, which I will cover in an upcoming post.

A note on when to hike to Choquequirao: the dry season will make for the best conditions, between March and October. However, should you attempt it in the wet season, know that it is possible but the trail may become slippery and dangerous, and your views will probably be obscured by cloud. 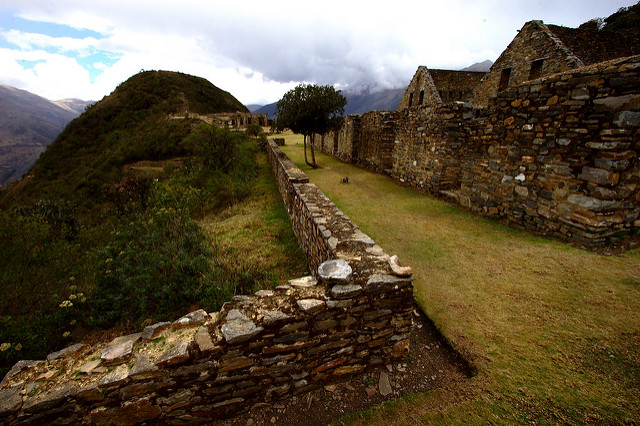 How to Hike to Choquequirao Without A Guide 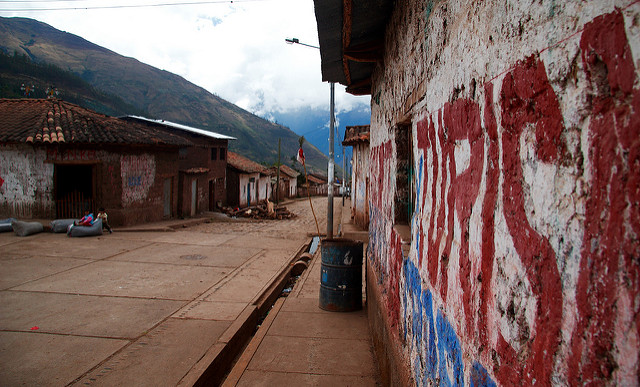 How to Get to Cachora

If you’re going to hike to Choquequirao, first you’ve got to get to the starting point: Cachora. From Cusco, get any bus headed to Abancay, the earlier the better if you plan to start hiking on the same day. When I made the trip in June 2014, we were able to get a 5am bus, which got us to Cachora before lunch.

Ask the bus driver to stop at the Ramal de Cachora. At the Ramal, there will be several taxis waiting to drive you the 13km to Cachora. Should cost about 5 soles to share the taxi.

If you need to pick up last minute supplies like snacks or an extra packet of ramen noodles, Cachora is the place to do it. You can also allegedly hire a muleteer or even a guide, but I am not qualified to give you advice on that. You wanted to do this hike solo, right?

A note on timing: if you get an early bus from Cusco, you should be able to start hiking before or around noon. This gives you enough time to get to Chiquisca before dark. However, if you get a later bus and arrive at Cachora in the afternoon, you should probably wait a day before you start trekking. As I recall, there are a few affordable hospedajes in Cachora along with some upscale options.

Now let’s get to the good stuff: hiking to Choquequirao. 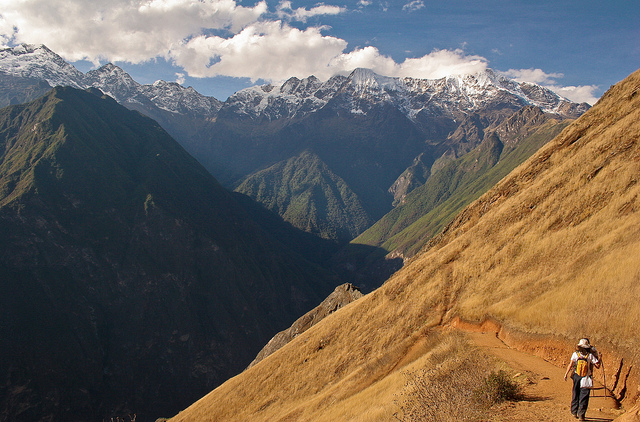 The views on this hike begin immediately, as Cachora sits on the edge of a steep canyon, commanding panoramic views of the snowcapped peaks across the divide.

From Cachora, head downhill on the main road through town until you hit the farmlands. You should find a sign indicating the trail to Choquequirao. Take a left, cross a small stream, then take the path up to the road. Walk along the road until you come to the Mirador, an outcropping of land jutting into the canyon.

From the Mirador, it’s a long, steep set of switchbacks all the way down to Chiquisca at km19. If you got a late start, this is a good spot to camp. However, if you make it to Chiquisca early in the day, I recommend pushing on all the way to the river or even to Santa Rosa Baja.

Pro Tip: Day 2 is the most intensely grueling day of the entire trek, so the more ground you can cover on day 1, the easier day 2 will be.

Let’s assume, for the purposes of this itinerary, that you only make it to Chiquisca on Day 1. This campsite has streams for water, small shelters for cooking, and plenty of space to pitch a tent. Get a good night’s sleep because Day 2 is not a joke. 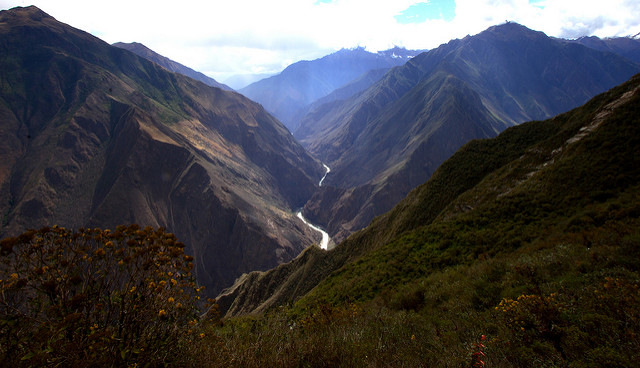 The earlier you can start day 2, the better. The trail is a long, steep, and without shelter from the blazing sun. If you can get at least halfway up the mountain before the sun rises to its apex, you’ll be thankful.

From Chiquisca, the trail continues down the mountain to the river below. At the river, you’ll find a campsite and a suspension bridge. Take a moment of silence in honor of your strength, endurance, and capacity, because they are all about to be pushed to their limits.

From the canyon floor, the trail heads up steeply, in a series of switchbacks that go on forever. I made the mistake of thinking that I must have almost reached the top. Don’t worry. You haven’t. You’re in for a big climb and your legs are going to feel it.

You’ll pass Santa Rose Baja, and a few minutes beyond that, Santa Rosa Alta. There are stores here and a nice flat, grassy area. It’s a good spot to stop and enjoy a snack. Then, continue following the merciless trail as it leads you relentlessly upwards.

At long last and well beyond your breaking point, you’ll come to the top of a switchback and find the trail leveled out. A bench awaits you, granting a respite from standing and a view out over the canyon wall you descended the day before.

From there, it is only a short walk to the village of Marampata, where you can find shops selling snacks, beers, and even a campsite. However, if you have the energy, I recommend continuing onwards and camping at the site below Choquequirao. It’s quite a bit further, probably another hour of hiking, but well worth it to camp so close to the ruins.

On the walk to the campsite, you’ll get your first view of Choquequirao perched precariously on the edge of the mountain ridge. 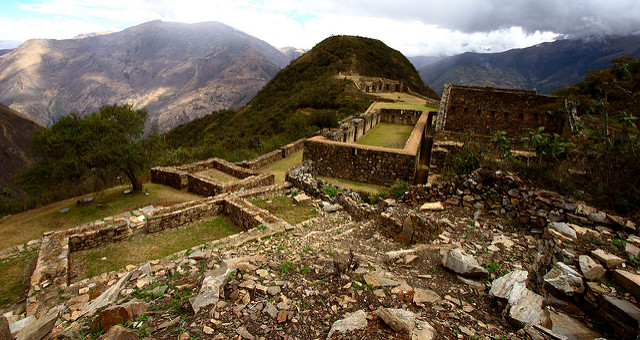 Today is the day! After the labors on the mountainside on day 2, you’ve more than earned the right to visit this secretive world wonder. Whether you’re camped at Choquequirao or Marampata, I recommend getting an early start to experience the majesty of this temple in the early morning light.

The trail cuts through thick jungle and muddy mountainside on its way to the sanctuary. A few steps out of the jungle and suddenly you find yourself on the main plaza, in the center of a temple equal in size and splendor to Machu Picchu. 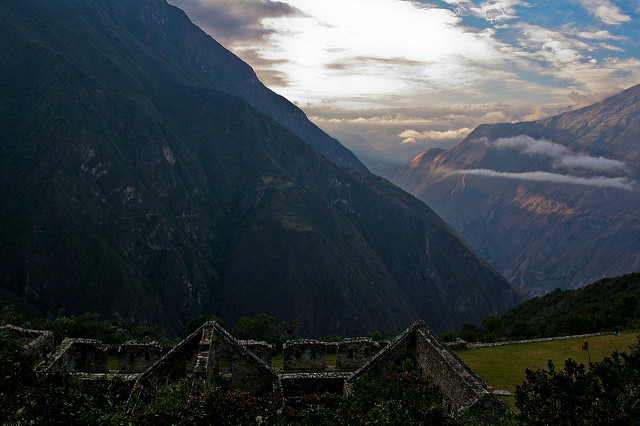 The true joy of a visit to Choquequirao comes not from the structures themselves but from the serenity of the space. Take a seat beneath the single tree in the main plaza and appreciate the silence and the grandeur of this Incan Temple.

When you’ve basked long enough, stroll slowly through the structures, make your way down to the terraces, or climb up to the main temple plaza. From the top, you can look down and see all of Choquequirao spread out before you. Your mind will struggle to comprehend the idea of people constructing this massive complex nearly 600 years ago.

And yet, here it stands.

Allow a full morning for exploration and enjoyment of this wondrous landmark. Eventually, however, all good things must come to an end. If you’re taking on the massive nine-day hike to Machu Picchu, head uphill through the temple to find your Incan Trail.

For those who are only taking on the four-day trek, it’s time to tackle the long downhill and small uphill back to Chiquisca on the far side of the canyon. 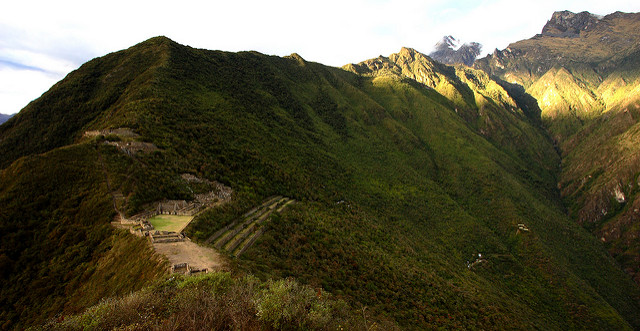 The climb from Chiquisca up to the Mirador, so easy when it was a downhill, becomes somewhat more grueling on the way back up. Once you gain the Mirador, a well-earned beer awaits you at the small shop there.

Once revived by your adult beverage, only a short walk stands between you and Cachora, where you can easily find a room for the night or a taxi to drive you back up to the main road. In order to hitch a ride back to Cusco, you’ll have to do it the Peruvian way, when you see a car, van, or bus, hold out your hand flat and wave it up and down. Eventually, someone will stop and offer you a ride. If you’re nervous about it, negotiate a price up front.

Once back in Cusco, you are faced with a choice: do you tell other travelers about the majesty of Choquequirao, or keep the secret of this remarkable place close to your heart? 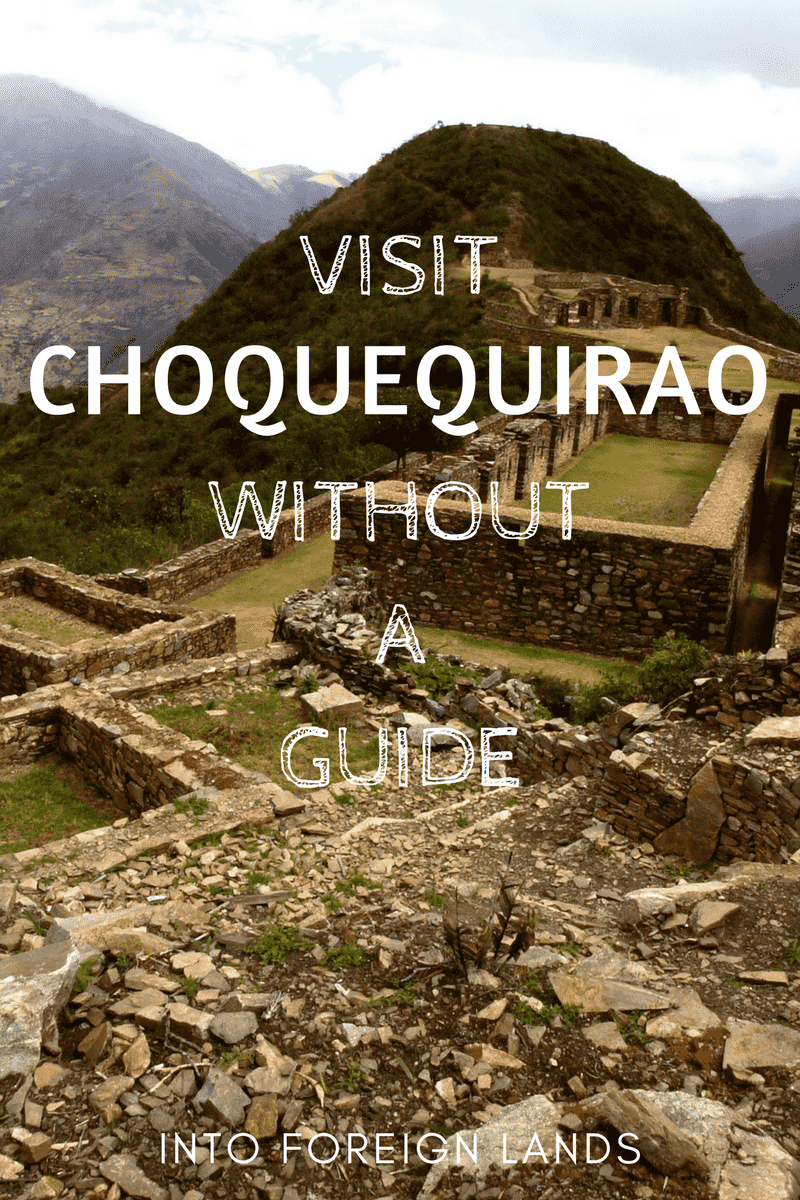 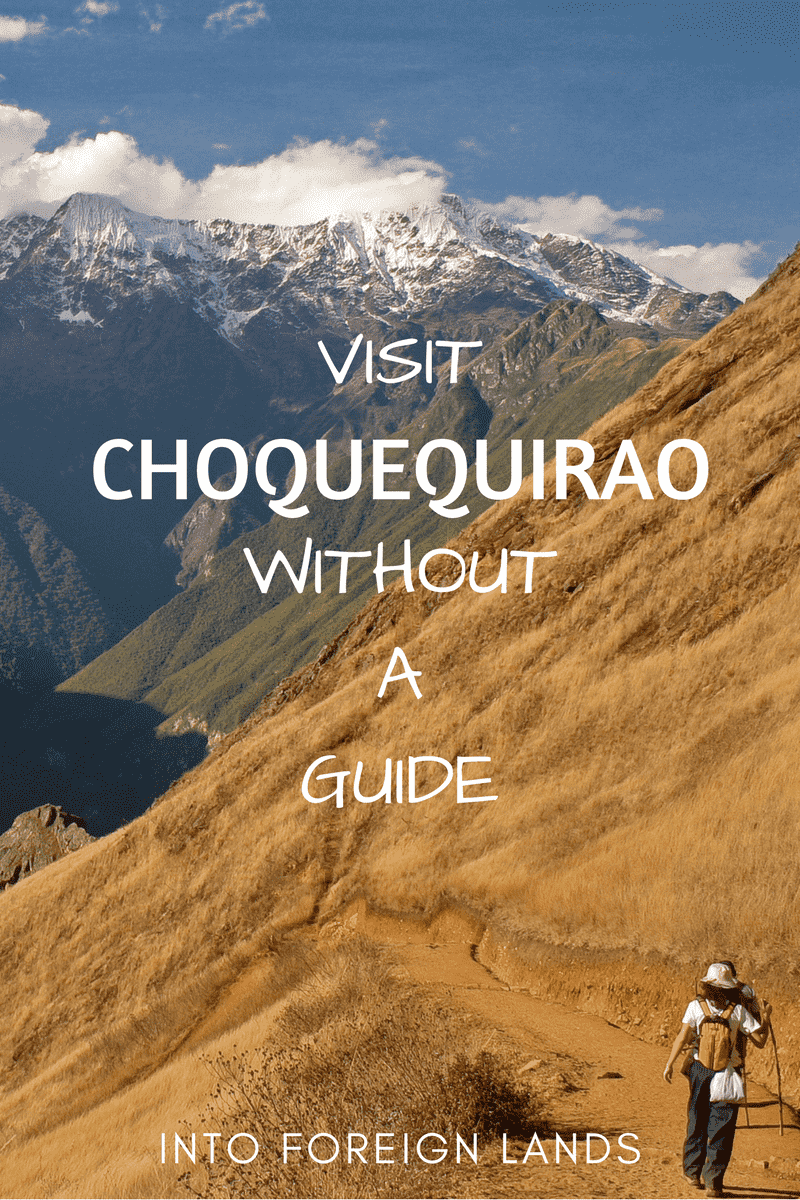 17 thoughts on “Visit Choquequirao Without A Guide”