The only known route between two of Cambodia’s most remote eastern provinces, Mondolkiri and Ratanakiri, has long been known and feared as the “Death Road.” But the most recent accounts I could find were from 2011. Photos showed a red and dusty path through the jungle, accounts described a road almost impassable in the rainy season.

But in June of 2017, deep in the rainy season and many years after these photos were taken, what would I find?

Cycling from Mondolkiri to Ratanakiri: My Plan of Attack

Now more than a month into my cycling journey around Cambodia, I was not intimidated by the length of the road, nor the uninhabited jungle I would pass through. Instead, I felt curious. What would I find in this vast unknown?

The death road runs 184km from Sen Monorom, in Mondulkiri province, to Banlung, in Ratanakiri. There are a few small towns along the way, including Koah Neak, 95km in, and Lumphat, 150km in. It is the only route between these two towns.

Since I lacked the appropriate camping gear to stand up against the torrential rains of Cambodia’s monsoon season, I hoped that at least one of these towns would feature a guesthouse, or at the very least, a kind and welcoming family.

If things got really desperate, I figured I could physically ride the 184km in one day, though it would be difficult. Midway towns notwithstanding, I planned an early start. If I could get to Kaoh Neak by midday, I should be alright to either take a guesthouse there, ride on to Lumphat, or, worst case scenario, push all the way to Banlung.

I really hoped I didn’t have to ride all the way to Banlung. My longest day up to that point had been 120km and it had almost killed me. 184km could quite possibly put me in the intensive care unit.

Though I had no idea what kind of road conditions I was facing, I at least had the power of technology to give me an idea. I plotted the route into google earth and pulled up the elevation. It looked like a massive drop of coming out of Sen Monorom, a long valley, and then a steep climb back up to Banlung. Totally doable.

After two days of touristing it up in Sen Monorom, I was ready to take on the death road.

I suppose, once upon a time, the death road was a truly dangerous and rarely used path. Unfortunately for us adventurous souls, those days are long gone. I’m both happy and sad to report that the death road is now a well paved, though still relatively less used, pathway through mostly deforested jungle.

I’m happy about it because it means safer roads for the local population. On the flip side, I love a good adventure but paved roads don’t really lend themselves to being lost in foreign lands. Also, the paved road means easier access to this once remote area. Easy access means migration, population increase, and an increase in deforestation and wildlife damage.

A perfect example of this is the wildlife refuge I rode through on my second day. But I’m getting ahead of myself.

Day one on the death road began bright and early. Up by 5:30am, I was out the door by 6 and finished with my traditional rice and pork breakfast by 6:30am. Unsure what I faced and whether or not there would be villages, I stocked up on 3 liters of water and a bag of banana chips.

To get onto the “death road” from Sen Monorom, follow the main road out of town until you reach the roundabout. Make a right. Continue to follow this strip of pavement past the Bousra Falls turn and onwards to Banlung. Yep, it’s that easy.

As the road left Sen Monorom it continued across the hills that had so tormented and delighted me only a few days before. I devoured the uphills and coasted down the short downhills.

After about 20km of this, I crested to the top of a particularly steep climb only to be greeted by one of the most satisfying views that can greet a cyclist: the road dropped away steeply and a massive valley opened up in front of me.

It was a loooooong downhill.

As I do on long downhills, I started belting out whatever song was stuck in my head. I think it was a Taylor Swift song on this particular morning. Again, don’t ask me why. I get the weirdest mixture of songs stuck in my head while riding.

The downhills went on forever. It was a drop of nearly 2000ft, spread out across about 15km. The first slope took several minutes. From the bottom there were a few more inclines, but again down, and down, and down.

Even in the Cardamoms I didn’t get downhills as satisfying as these. It was like the past weeks of cycling had all built up to this one euphoric moment.

The adrenaline and joy built inside of me during these speedy declines and stayed with me as the road leveled out. To be perfectly honest, the rest of the morning is a bit of a blur. My legs felt incredibly strong and I powered along the road, making it to Kaoh Neak by 11:30am. There, I was pleased to find not one but three different guesthouses! Choice! That’s not something I get every day.

Picked a likely looking spot, had a shower, had some lunch, and spent the rest of the day working. That digital nomad life does require sacrificing afternoons of exploration at times, I’m afraid.

From Kaoh Neak to Banlung was 90km along the rest of the now paved death road. I was unafraid and excited. I’d been dreaming of visiting Ratanakiri since I first came to Cambodia in 2014. Back then, I didn’t make it to this outpost. Now, I finally would.

The first half of the day was pretty flat and uneventful. The road takes a hard left in the middle of Kaoh Neak then becomes pretty deserted, just sparse jungle and a few shacks here and there. 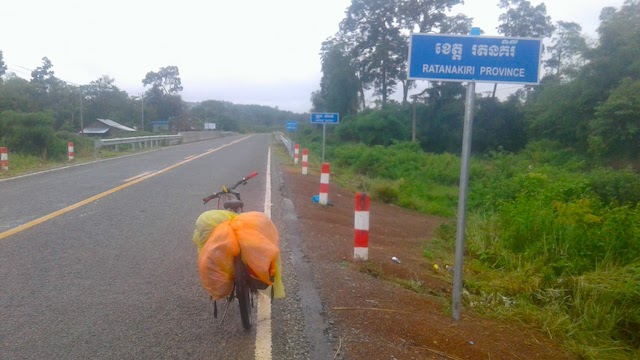 Men rode by me fairly frequently on their motorbikes, leaning over dangerously to stare over their shoulders and watch me ride, ignoring the road in front of them.

After 50km or so, I passed a sign saying “Lumphat Wildlife Sanctuary”. Up until this sign, I’d been riding through jungle. Yet pretty much from the moment I passed this sign, the jungle vanished. It was cut back acres and acres from the road. I could barely see the trees in the distance. It wasn’t being used for agriculture but it was inexplicably empty.

At first in my gullible optimism I thought it was a natural occurrence. How cool! In the middle of all this jungle to find such a large clearing. I wonder what caused this? Perhaps a chance in the chemistry of the soil…

A few minutes later and I was relieved of this ridiculous optimism. This wasn’t a natural occurrence, oh no.

The jungle had been cut away by that plague that covers almost all of this earth: humans. And what replaced this gorgeous, thriving jungle? Palm oil trees.

They had stripped the jungle to plant palm oil trees.

I was livid but since there didn’t seem to be a representative of the palm oil company waiting by the side of the road to take my complaints, I continued cycling.

The small town of Lumphat sits in the middle of the valley, just before the hills begin to rise up again on the way to Banlung. I stopped here for a quick coffee and checked the map on my phone. As I was perusing the road up to Banlung, I saw a little marker for a waterfall. A quick calculation showed I could easily detour, adding only 2km to my day.

Obviously, it was time to head to the waterfall.

20km later and I reached the turn for the falls. This falls, called O’Katieng Falls, are one of the tourist attractions of Banlung. As such, tourists usually approach them from the other direction. Coming from Sen Monorom, as I was, the road was unmarked. I took the turn onto the dirt road and soon found myself riding through a small village. As with other rural villages in the past, the locals seemed uncertain about my presence there. I’m sure they were wondering why on earth a foreigner was riding a mud covered bike through their village.

After a few missed turns, a bit of getting lost, and a little navigation of some mud and water filled roadways, I found the road that heads up to the waterfalls.

Up is the operative word. From riding along the flat valley floor, I was suddenly faced with a road so steep it seemed to jump perpendicularly up into the air.

Not one to shy away from a challenge, I built up some momentum, dropped into a low gear, and charged up the hill.

Now is probably a good time to mention that this road was not paved. Not paved, not even really ridable, it was mostly an eroded, rocky scramble up a mountainside. I reached the top, gratefully gained a small plateau, and was immediately faced with another slippery wall of dirt heading up the hillside.

This continued for about two kilometers. At times it was so steep I was forced to dismount and push my bike up the hill.

It was the most fun I’d had in ages.

After awhile I reached the falls. Finding myself alone, I took some time to walk down into the hollow and enjoy the peaceful sense of wonder that comes with waterfalls. 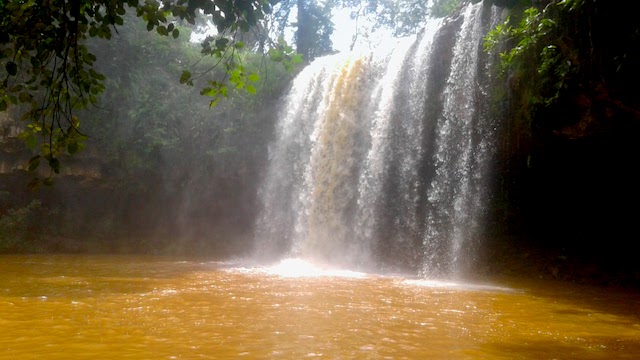 Snacked on a few mangos, and headed on towards Banlung.

The rest of the way was really quite scenic. No more steep walls of dirt to scale, the road leveled out and became slightly more reasonable. Pretty soon I was riding along rolling hills through rubber plantations, with the temples and rooftops of Banlung visible in the distance.

By 3pm I was settled into my hostel and ready to explore.

As you can see, the Death Road is really no longer a death road at all. If anything, the only danger to cyclists is the vans, busses, and cars that go flying along the road at breakneck speeds. If you hear a car coming behind you, hug that shoulder for dear life because they are probably driving at 160kmph. But other than that it’s an incredibly safe, ridable, and easy road to finish in one or two days.

Also, sorry about the garbage photos with this post. My camera died and I was forced to use my totally crap phone. The good pictures will come back, I promise.

What do you think? Would you cycling the death road?