As part of my trip around Cambodia, I spent a few days resting and exploring the charming riverside town of Kampot. Driving into Kampot, the first thing you notice is the massive mountain rising up beside you. And sitting on top of that mountain is the fabled Bokor Hill Station, a must see if you’re wondering what to do in Kampot.

But since I was there in the beginning of the rainy season, I was a bit nervous to rent a moto and ride up Bokor Mountain in the rain.

Still, I’d been wanting to visit the famous Bokor Hill Station on top of Bokor Mountain for months. Back in the early 20th century, when Cambodia was still a French Protectorate, the French built an elaborate resort and casino on top of the hill. Today, all that remains is a shell of that decadent past. It makes for a great day trip.

The resort, up close

Although I had ridden my mountain bike 600 kilometers to get from Battambang to Kampot, there was nothing that could make me ride my bicycle up to Bokor Mountain. The road is 35km uphill. Just no. I was relishing the idea of renting a moto and effortlessly driving myself up to the top. It was something I’d been dreaming about for a few days while I pushed my bike up the ruthlessly steep hills outside of Koh Kong.

Renting a Moto in Kampot

Renting a moto in Kampot is incredibly easy. It’s the main way that tourists get around town, so there are heaps of people willing to rent you a “new moto” for $4 a day. I saw one guy offering motos for $5 a day. I think he doesn’t get a lot of business.

I’m a brat and wanted a manual moto, so I wandered around town for 15 minutes looking for one. Most places only rent automatics, but eventually a found a shop, Hong Kimeng, and for $4 I had a Honda Wave for the day.

If you, also, want to rent a manual moto, you can find this place kitty corner from La Java Bleue.

When you rent a moto in Kampot, you have to leave your passport behind as collateral. As long as the moto comes back with no damage, you’ll get your passport back.

If the moto comes back damaged, they’ll hold on to your passport until you pay for the damages. And assume that you’ll be overcharged.

The Ride from Kampot to Bokor Mountain

Getting from Kampot to Bokor Mountain is pretty easy. Just head back out of town on the road to Sihanoukville for about 10km, maybe a little less, and eventually you’ll see a massive gate on your right hand side. The gate says Thansur Bokor Highland Resort but this is also the entrance for the national park. They’ve just built a massive, and massively ugly, modern resort casino up there. 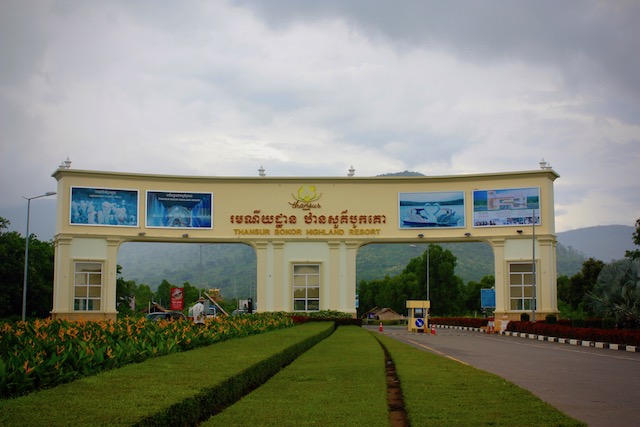 Entrance for a moto is 2000 riel, or 0.50USD. You pay a guard at the gate and he gives you a parking pass. Hang onto that, you’ll need to show it again at the top.

As I drove past the gate, I looked up to see the mountain wreathed in fog and clouds. It had been raining earlier in the morning in Kampot but by now the rain had let up. Still, as I drove towards the mountain the rain began again. I hoped it would clear. 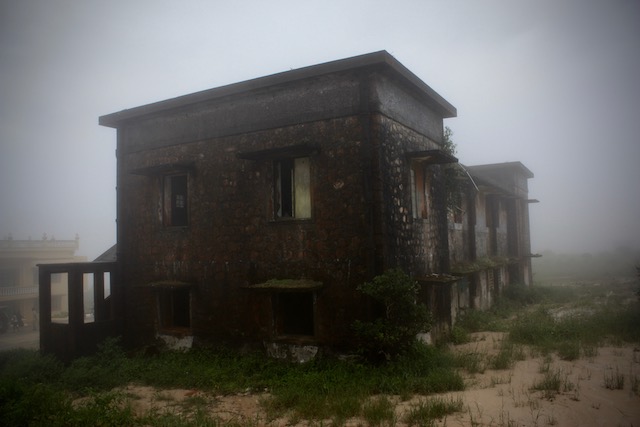 Buildings in the fog

The road up the mountain is winding but easy. It’s uphill but not to steep, and the corners aren’t particularly tight. It’s a pleasant drive, but make sure you fill up your gas tank at the bottom of the hill.

Driving up, I quickly entered the clouds and with them came the rain. I couldn’t see to my left or my right, and even my visibility in front of me was limited. Still, I’m a stubborn girl and I was determined to get up to this ruined old resort.

After 30 minutes or so of driving, I came to another gate, and a sign indicating that the road would split into a T-junction. Showed my parking pass to a guard and passed through. Because the fog and rain was so thick, I had no idea where I was or what was around me. A sign showed the “old casino” was off to the left, so I took the left turn after the roundabout. 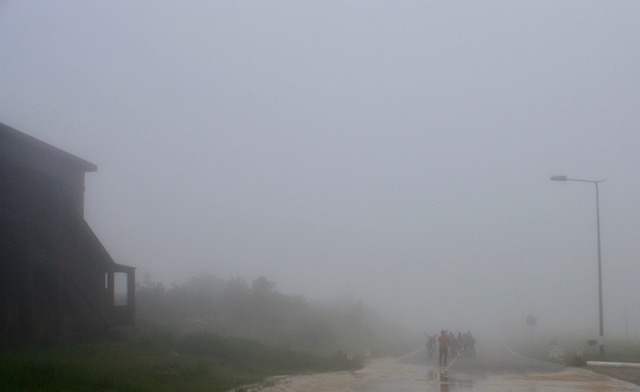 The rest of the drive was incredibly spooky, in a really great way. Limited visibility. Every once in awhile people or buildings would emerge out of the fog. I drove slowly, headlights on, savoring the effect. The rain had let up a few minutes before but I was still soaked and shivering, even under my thin plastic poncho.

Eventually, confused and lost, I came to the end of the paved road. I couldn’t see anything. There were no signs telling me where to go, and nothing to indicate where this old casino was located. I was a bit frustrated but still game for an adventure. I parked my bike and wandered off into the fog.

A large building emerged and I could see a path going behind it. As I followed that path up the hill, the fog began to clear, and I was suddenly confronted with a jaw dropping view out over the mountains to the ocean. 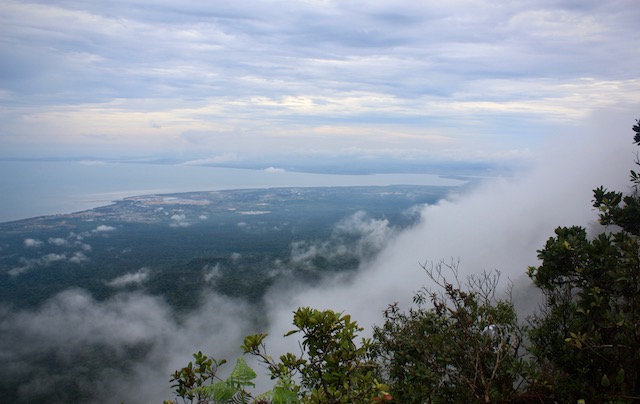 The view begins to appear

I gazed out at the sea for a few moments, soaking in that uniquely euphoric feeling you get when standing on top of a mountain. After a few moments of stillness, I looked around and realized the fog had lifted. And with it, my location was revealed to me. I was standing on the edge of a cliff, with the old casino 100 meters to my right, and some other ruined buildings down below me on my left.

In the fog and the rain I had driven by everything, completely oblivious. Now that the fog lifted, I found myself in a stunning environment. The mountains rolled away behind me, the sea stretched out before me, and a ruined old resort sat perched a top the cliff to the my right.

The casino itself was fun to explore. You can’t go inside the building but you’re free to wander around outside of it. There are some stands across the street that sell coconuts and snacks but I didn’t go check them out.

After some time taking photos and enjoying the atmosphere, I was ready to ride back down the hill. It was 4pm by this point and I hadn’t eaten since breakfast. I hopped back on my moto and cruised down the hill.

The way back down was wildly different than the way up. The fog, clouds, and rain had entirely disappeared and instead I was gifted with incredible views of the surrounding mountains and countryside. I passed an old church, the ugly modern casino, and a large statue of a meditating woman, which I believe was called Lok Yeay Mao.

I flew back down the hill, mostly just coasting in neutral and enjoying leaning into the turns. If the ride up took about 45 minutes, the ride down might have taken only 25.

If you’re planning to ride up to Bokor Hill Station in the rainy season, pay attention to the weather patterns. The few days I was in Kampot, it rained around midday then cleared up in the afternoon. My luck held and I was granted stunning views of Kampot and the countryside. Being up there in the fog, though pleasantly creepy, is nothing compared to the views you get when the sky is clear. 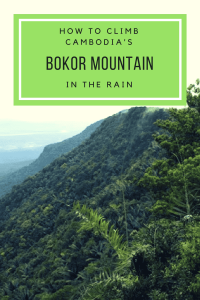 3 thoughts on “How to Climb Bokor Mountain in the Rain”