Until now, I’ve shied away from writing a blog post that is critical about travelers or traveler culture. I didn’t weigh in on beg-packers. I haven’t criticized the false dichotomy of traveler vs tourist (it’s the same thing guys, we’re all tourists!), and I haven’t joined in on lambasting trust fund kids on their gap years. But as I ride my bike around Cambodia and move from remote areas of the countryside to heavily trafficked tourist cities, I’ve decided its time to address a frustrating comment I’ve heard from almost every traveler I’ve spoken with.

Ask any traveler what they love about Cambodia, they will inevitably answer “the people are so kind!” or something similar.

This isn’t limited to only Cambodia. I’ve heard it said about Myanmar. About Nepal. About Laos. And I’m certain that it is said about many more countries around the world. “I love [insert country here], the people are so nice!”

Why Is This Problematic?

Whats wrong with saying this? On the surface, it seems like a great thing to say about a country. It’s a positive comment that expresses how open we are to meeting people from this culture that is so different from ours. To be honest, I used to say this all the time. This comment is one of the reasons I came back to Cambodia in the first place.

But since being back in Cambodia and learning more about their culture and making friends with Cambodian people, I’ve begun to think more critically about my old ways of thinking, and I’ve noticed a few troubling things.

EDIT: I’ve removed a section here where I discussed only seeing westerners make this comment about Asian countries. I have been corrected by friends from around the world. This comment “the people are so kind!” is made in the same spirit about countries around the world, rich or poor.

Being able to say that “the people are so nice” allows us to make a sweeping positive comment that says something and nothing at the same time. We’re expressing an opinion about a culture but it only indicates that we haven’t actually learned about or understood that culture in the least.

Smiles Are Not A Substitute for Interactions

At least in Southeast Asia, I think this notion that “the people are so nice” stems from the fact that strangers will almost always smile when you make eye contact. And yes, it feels good to be smiled at all the time.

I often read blogs or talk to people who say “even though they have nothing, they are still so happy and content with their lives!” This comment is based on a smile and a two minute interaction with a local before returning to their foreigner filled hostel.

But the ever present smiles in Southeast Asia come from a culture tradition and don’t necessarily mean that the person smiling at us is actually happy.

On the flip side of this, I’ve met travelers who say “I don’t really like Cambodia, the people aren’t very nice. They always frown at me.” Which, okay, I don’t like to be treated badly either. But why not ask yourself why the Cambodians could feel that way? What is going on below the surface that you aren’t seeing?

We’re getting close to the heart of my issue with this “the people are so kind” comment.

“The People Are So Kind” is Insensitive and Reductionist

When we boil an entire culture and entire people down to “the people are so kind” we are romanticizing their life and ignoring the depths of their culture. We’ve decided that, based on our week or month spent traveling around this country, we understand “the people” who live here, only because they smile at us.

Beginning to see the problem?

Something I noticed as I backpacked around Asia was this: when we travel through a country, we don’t really get to know that culture. When we travel, we see a country’s highlight reel. We see what they want us to see. We don’t see the big picture.

How can we assume to understand “the people” of a country from just a short visit to their touristic cities and main attractions?

I think this becomes more noticeable when you decide to settle down in a foreign country. After a few months, the beauty fades and the reality remains. The country is still beautiful but you also begin to understand that the people who live there have problems, have daily stressors, have flaws. They can be happy and sad. The country can be enjoyable and annoying. What you loved while traveling is still there but the picture is more nuanced now.

To be fair, even after a full year of living in Cambodia, the people and culture here still surprises me on a near daily basis. Assuming that you understand a culture or understand a group of people is, dare I say it, pretty arrogant.

When you decide to say that “all the people in Cambodia are so kind” you are allowing yourself to say you know Cambodia without actually getting to know Cambodia. This applies to any country. The people are happy because they smile all the time. They are unpleasant because they don’t smile.

The reality is much more complicated.

I have some Cambodian friends who are kind, caring, and some of the best people I’ve ever met. I have other Cambodian co-workers who I cannot stand and hope never to see again. In short, the people I know in Cambodia are just like the people I know in any other country: some are kind while others are self-righteous assholes.

Perhaps things could be better if, as travelers, we try to remember that the citizens of any country are actual people, with actual lives that have ups and downs, and actual personalities that are a mix of good or bad.

There is no country where “All the people are so kind”.

What can we do instead? What positive thing can we take from this rant?

If we really want to learn about different cultures pick up some books about the country before heading over. Read about their history, recent and ancient. Pick up the English language newspaper in the capital city and read about their current events.

If we look at other cultures as equals, instead of tourist attractions, the entire experience of travel becomes so much richer.

TL;DR: Please stop saying “I love [insert country here] because the people are so kind!” It’s insensitive and a total cop-out. Make an effort to learn about the culture instead. 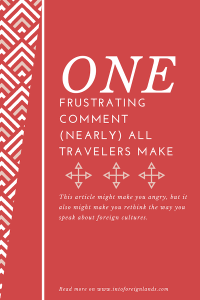